The Australian dollars remains under further pressure today, following on from yesterday after disappointing jobs figures which all but guarantees the RBA will keep rates on hold for the foreseeable future.

This factor will hurt the Aussie dollar’s attractiveness as a high yielding currency which has been a major factor in supporting the currency in recent times.

“The yield spread on Australian and US 2-year bonds is at just a little over 6 points, while the Aussie 10-year is offering a pick up of just 20 points to bond investors. You can hear the shouts of “why bother” in Boston, New York, and Newport from here,” noted AxiTrader’s Greg McKenna

“The Aussie will continue to under-perform until that spread turns around or until the AUD falls far enough to look like value. That’s not likely until there is a 73 cent handle on it ,at least.” He added.

Looking at the chart things are looking pretty grim from a technical point of view as well.

We can see the formation of a bearish head and shoulders pattern with a lower neckline which may be a signal of further losses to come.

At the time of writing this article the Aussie dollar has found some support at around the US75.50c level which it reached last time in June of this year.

Any break below this critical level will likely open the flood gates and. See a pullback to around US73.80c 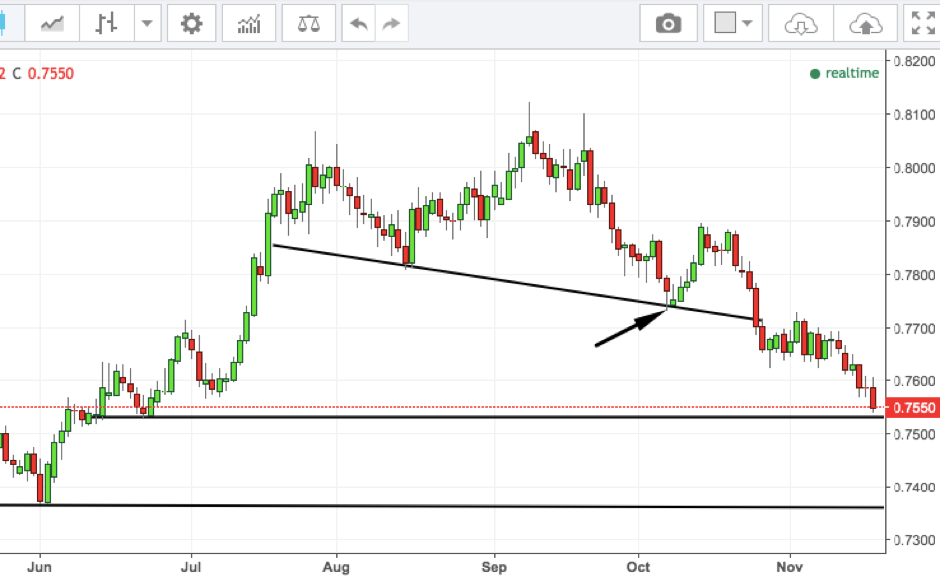